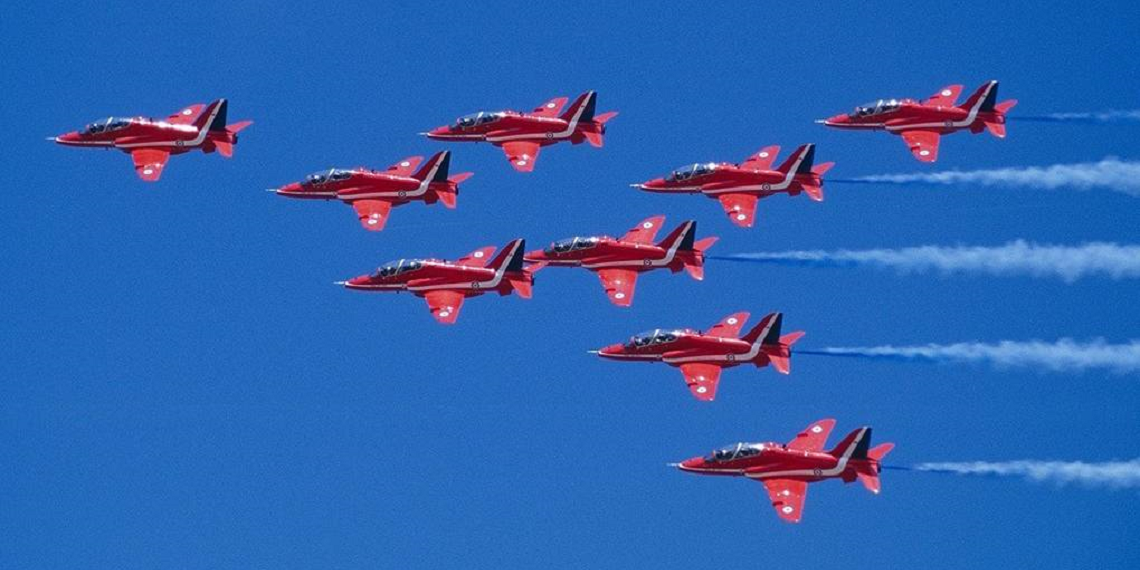 As well as deputising on occasion for the official commentator of the Royal Air Force Aerobatic Team, ‘The Red Arrows’, shown here with nine Hawk T1/1As, Roger Hoefling has commentated on displays by the national teams of such as Austria, Belgium, Chile, France, Italy, Jordan, Morocco, Netherlands, Portugal, Slovak Republic, Sweden and Switzerland. (Royal Air Force)

RAF Leuchars had been one of the three annual RAF Battle of Britain ‘At Home’ Day venues when runway resurfacing in 1980 forced the RAF to find an alternative Strike Command station at which to mark publicly the Battle’s fortieth anniversary with an ‘At Home’ Day. RAF Coltishall was chosen in April for the September event which otherwise would demand a year’s planning, especially since it had been seven years since the Station had last held a similar display. 1980 was Coltishall’s fortieth anniversary too, it having played a significant part in the Battle. Commissioned by Strike Command the day before the Station learned of its selection, Roger Hoefling’s brief was to ‘teach them all displays from the grass roots up’ in acting as both consultant and commentator. Responsibilities included organising the flying display, road traffic arrangements and marketing, while added complications were a notorious local traffic bottleneck and construction work precluding the parking of any visitors’ cars on the Station. Against Coltishall’s own forecast attendance of 25,000, Roger set 50,000 as the target with 48,000 being achieved.

The following year Roger Hoefling began commentating at the resumed RAF Leuchars ‘At Home’ Day. This resumption interested not only the public. In 1982 came the first of several instances when an interruption to the display had to be explained as one of the Station’s Phantoms, fully-armed, on QRA (Quick Reaction Alert) took off within three minutes to investigate Soviet aircraft nearing the UK Air Defence Region. On occasion, a second launch would take place during the Day or a Phantom would land back during the display following the interception.

Roger Hoefling has been the commentator and more at 39 Battle of Britain ‘At Home’  Days, part of a total of 67 RAF events so covered at RAF Abingdon, Biggin Hill, Coningsby, Cosford, Finningley, Honington, Leuchars, Marham, Neatishead, St Athan and Wittering. One of those at RAF Marham was the Royal Air Force’s seventy-fifth anniversary Royal Review on 1st April 1993 in the presence of  HM The Queen, HM The Queen Mother, HRH Princess Margaret and HRH Prince Philip, the largest gathering of the Royal Family at an RAF event since the Royal Review in 1953. See INTRODUCTION